The best ribs in the world are in Brussels.

I figured it might be better to just say that at the beginning in case no one reads anything after the first sentence. At least now you know what city to go to if you like ribs. For the restaurant’s name, however, you’ll have to read a bit more 🙂

Like everything hipster, being a foodie has become cool, and so everyone claims to be a foodie without having any idea what that means. Google seems to think it’s “a person with a particular interest in food”, which is silly, because anyone who wants to stay alive has a particular interest in food. Foodie or not, I enjoy eating products that taste like they were grown in soil, then prepared by a human. Fortunately, traveling provides many opportunities to try food that fits my rigorous requirements. I have tasted some truly decadent meals, and while I won’t be giving out superlatives, I will share with you my magical secrets.

The best meal I ate in Prague came from Lokál, a cafeteria/restaurant with Czech specialties and endless beer. I drank a beer, then ate goulash with bread dumplings (and beer), and because it was so good, I ordered a lentil soup (with more beer). Somehow, I was still hungry after that, so I went to Aldolce to eat what was easily the best dessert I have had in years. I ordered a lemon ginger mousse with grapefruit juice. I then became so happy with myself and life in general, that I proceeded to enter La Perla and try on 250 euro bras. I almost bought one*, but then realized I didn’t actually have 250 euros in my bra budget. Ahhh, well, next time!

In Bangkok, I happened to be staying right near what locals deem the area’s best Pad Thai, served at a restaurant named Tip Samai. If you don’t believe me, google “best Pad Thai in Bangkok”, and see what the first few entries are. I ate it five times in five days.

And now, for the ribs. One night while I was walking around Brussels with a friend, we saw a queue of people waiting outside a restaurant with a full size taxidermy cow. Obviously, we ate there. Practically everyone ordered the same thing: ribs à volonté. All. You. Can. Eat. Amadeo’s ribs are marinated in a tangy-sweet barbecue sauce that ended up in my stomach and all over my face. The ribs were ridiculously delicious, and if you go to Brussels (and eat meat), you must go there. 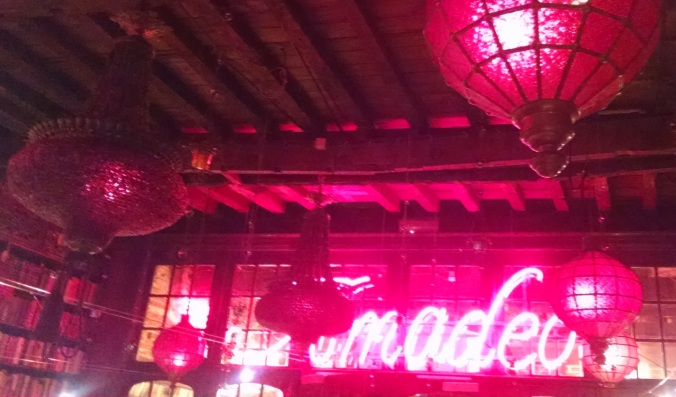 The ribs. ORDER THE RIBS!

I have eaten so many good meals while traveling in Europe and Asia, but this is just the beginning. Next stop? Fermented yak milk in Mongolia!

*La Perla may be expensive, but their bras make you look and feel like a goddess.