As soon as I jumped on the back of his motorbike, my adventure began. 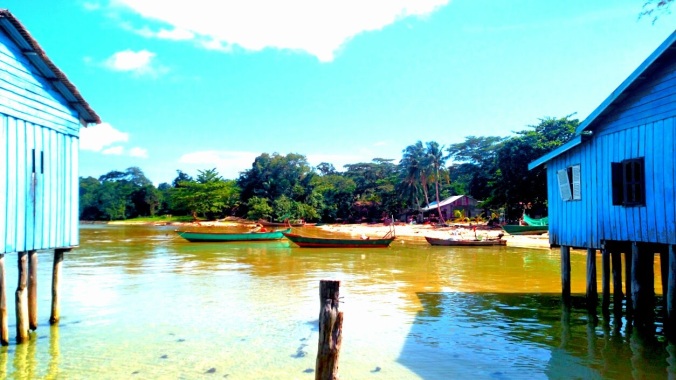 Wind whipping my hair*, Cambodian faces stuck on mine as their bikes edged forward, I noticed that there were no other white people on the backs of motorbikes, luggage hiding between the driver’s legs. I smiled as their frozen eyes never left mine.

“Dahling, it’s not smart, it’s normal,” the British hotel owner cooed as he explained a quicker, cheaper way to get from Point A (Sihanoukville, Cambodia) to B (Bangkok). Instead of lounging in the luxury of an air-con, tourist-filled 20 hour direct bus to Bangkok, Cambodians segment the trip, driving along the coast, the quickest way via public transport. “When in Rome,” I thought, “take the Cambodian buses”. 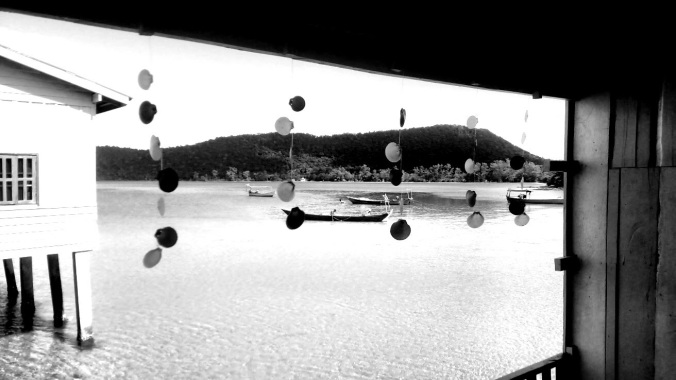 After strolling across the Cambodian border with Thailand amidst shouts of “I love you!” I asked about public transport to Trat, only to be informed that it had closed for the day. For the cost of 15 Shrimp Head Juice Pad Thai meals, a local bus driver could take me to Trat. I walked on. Along the way to nowhere, I asked again and again about cars/buses/tuk tuks/magic dragons to Trat or Bangkok, to no avail. The only option- private transport- was not an option. So I tried my thumb at hitchhiking.

Walking past the security checkpoint, the first truck I hailed stopped. Ignoring everything I’ve ever been taught about stranger danger, I climbed aboard, and after an amusing quarter hour of hand signaling, map pointing, and English-Thai translation via a helpful friend, we were off!

Pulling into the Trat bus station, my knight-cum-truck driver pointed to the ticket window. After two hours waiting, six hours of drooling/sleeping on the road to Bangkok, I arrived. Well, I still had a hot pink taxi ride to go, but I digress.

Sitting on the Floor, On my Way to Thailand

The next day busing back to my hostel**, my phone died. After insta-, tweet-, and snapping pictures all day at a travel blogging conference (TBEX), I grimaced. “My phone hath betrayed me!” I thought. Never unsticking my eyes from Google’s bouncing blue dot, I had planned to follow the bus’s progress to my hostel. How else would I know where to disembark?

I turned to the woman to my left and asked “English?” Her prepubescent daughter studied my hostel supplied map and told me that we were getting off at the same stop. Instant relief from technological difficulties came in human form.

Exhaustion. Anxiety. Hunger. Listlessness. These are a few of the states I enter when I exit my country, and I wouldn’t have it any other way, because traveling makes us reliant on our most precious asset: other humans.

After all, smart phones may make travel easier, but they make us dumber. So the next time you find yourself physically or metaphorically lost, put down your phone/tablet/computer/drone and look up. Someone is there to help you. *** 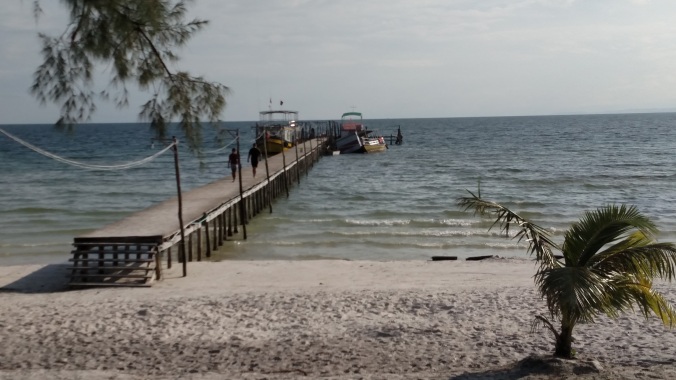 *never as sexy as portrayed in the movies
**near aforementioned Shrimp Head Juice Pad Thai, referenced here
*** I am not liable if you find yourself lost in the desert, no technology or camels at hand. In that case, ignore my advice. You’re probably screwed 🙂

Travel and tourism are two sides of the same cookie. One just tastes a little less processed.

A few days ago, I was walking through the ruins of Angkor Wat. I was sweating, and stickier than a popsicle. I saw hordes of tourists snapping pictures while also taking in the sites, as a thought occurred to me: “Is Angkor Wat really so different from Disney World?”

Sadly, there are no roller coasters at Angkor Wat. And definitely no air conditioning. But while dripping my way through the masses, I saw an opening and turned. I entered a chamber the size of a childhood bedroom, with few wall carvings. More remarkably, I was the only person there. I stayed in that room, enjoying the chill of being alone amongst many, thinking what the thousands who had existed in that room before me had done, and how they had lived.

I left the room, turned another corner, and saw again the tourists. My thoughts turned as well, to my comparison of Angkor Wat and Disney World. Perhaps the difference lie not in the places as much as in the way they were experienced. 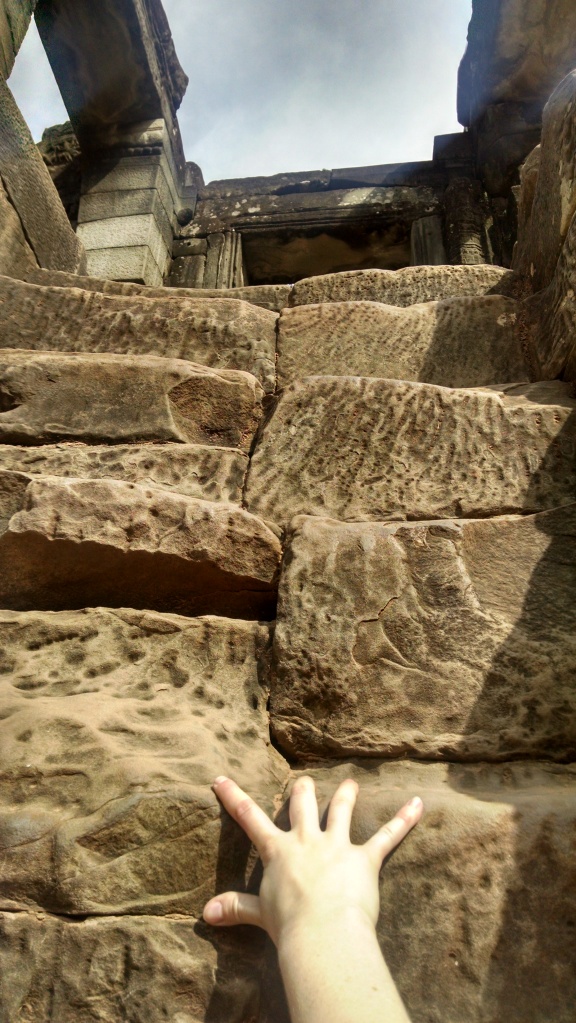 Indiana Jones would be proud

To fully enjoy the temples at Angkor Wat, then, I needed to do a little climbing. Some of you will know that I have a unique desire to climb and explore things that really shouldn’t be. If anyone shares this propensity, I have a bit of advice: go to the temples of Thailand and Cambodia. The guides there actually told me to climb on fallen pieces of the temple as I was looking for a more legitimate exit. And few things have made me happier than channeling my inner Indy to squeeze through broken windows and climb on thousand-year-old temples.

At the end of this long day exploring the temples near Siam Reap, my guide suggested I watch the sunset from the top of a temple on top of a hill. Part way up the hill, an official asked me to cover my shoulders. I didn’t have a scarf, so I had to put on a sweater I had in my backpack. I walked quickly up the hill, sweating more than I thought possible, until I reached the top. Once I did, I had to pee. Doing the pee dance while searching for a restroom, I realized nature’s toilet would have to do. I should note that I was wearing harem pants, those diaper pants that MC Hammer made famous in “Can’t Touch This”. As I attempted to gracefully relieve my bladder, I may have misaimed and ‘spilled’ a bit on these ridiculous pants.

SO, sweaty, pee-stained, and pissy as a teenager, I climbed to the top of the temple, and sat to watch the view. A Chinese man next to me motioned for me to scoot closer. It became apparent that he wanted to take a picture with me. I obliged. After, he looked at me and exclaimed, “Beautiful!” In case you were wondering, I felt- and was -the farthest from beautiful that I could possibly be. But that didn’t stop me from smiling. Quietly cracking up at the hilarity of the situation, I watched the sun set over the temple. From sweaty and grumpy, to cooler and calmer, I reflected on my mercurial moods. All it took was a little climbing to find my peace. That beats a roller coaster any day!