I knew I had to roll my body away from the oncoming wheels, but my motorbike pinned me to the road.

As my cheek hugged the highway, I saw the numerous front wheels stop spinning as the brakes squealed. “Well, that’s good,” I thought.

The driver slammed his door as he jumped down from what resembled two large white trailers glued together, attached crane dangling above my face. He picked up my Honda Wave, Scarlett, and set her straight. I dusted myself off and surveyed the damage. 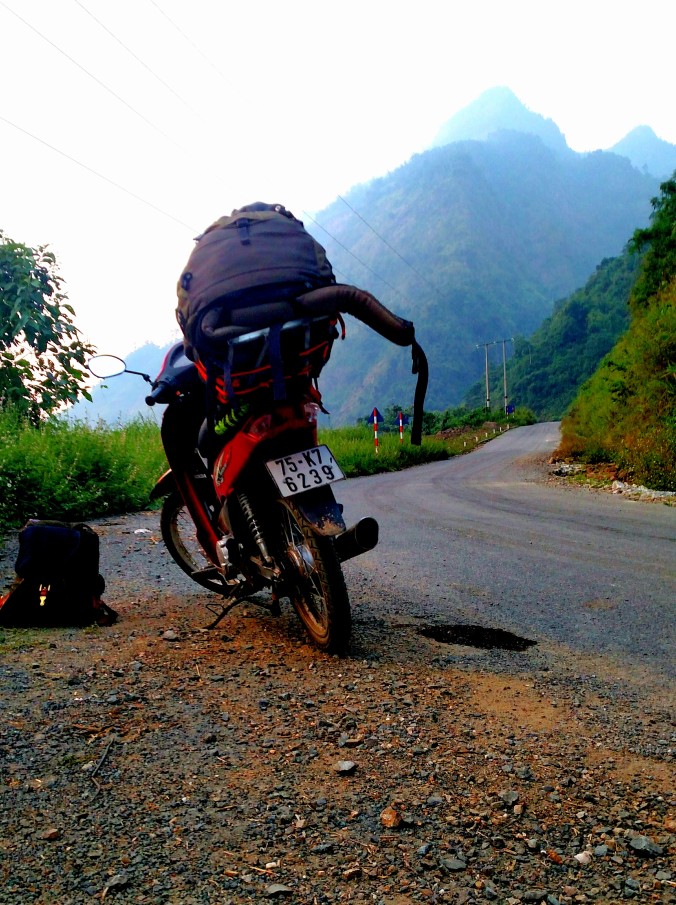 Scene of the Crime…If you look closely, you can see the gas spill 😀

Aside from some cuts and soon-to-be bruises, nothing felt amiss. Joints bent in the normal way, and I was shaking a bit, but I wasn’t broken. Though I was tempted not to, I had to get back on the bike.

This was my second day driving a motorbike, and not the first time I had fallen into trouble.

The day before, revving up a mountain in rural Vietnam, Scarlett began to drag. I turned around to see my backpack sliding from my loosely bound bungee straps. I stopped to properly load my pack, only to jump back on a bike that wouldn’t start.

Four or five Vietnamese stopped their bikes, tinkered with Scarlett to no avail, then repeatedly pointed down the mountain miming “gas station”, or so I imagined. I called my hostel in Lac Village in the Mai Chau district, who reiterated the good Samaritans’ advice. 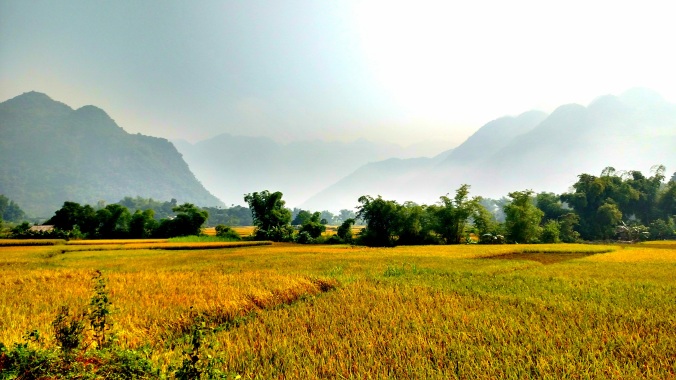 Turning Scarlett mountainside down, I shifted her to neutral and silently rolled to Vietnam’s answer to a rest stop. I then mimed pouring Scarlett a nice glass of petrol, to which a smiling Vietnamese woman nodded, gesturing to sit down and eat while someone went to pick up the gas.

Two beige stalks about an inch in diameter and a foot in length lay on the table next to a plate of chicken eggs in various shades of earth. Raising her machete, the woman who worked there grabbed a stalk and cut four or five sides of one almost to the end, sculpting it into a splayed flower framing a milky white tube of what appeared to be rice.

With the Rice Tubes! I wish I could have gotten her name. She saved my mood & stomach!

She handed me the hacked horn and spiced it with imaginary salt. Pinching the actual dirty brown “red salt” between my thumb and index finger, I let it fall onto the rice tube. I took a bite. Simple as sushi, without the fish.

As I enjoyed my tube-rice and hardboiled eggs, I watched a woman who had just arrived with a cage of chickens on the back of her bike. A man who had arrived around the same time walked over and looked at the birds. The woman then slowly took a hen from her cage, tied her legs, and placed her in a chicken sleeping bag: two plastic bags, handles tied, with a hole out of which popped the hen’s head. Without thrashing or moving her body at all, the chicken looked around her in the jerky way that only birds do. The man gave the chicken seller some money and placed the tied loops of the plastic bags, chicken inside, over his handlebar. He then sped off.

By now, Scarlett had also taken her fill, but before I left I wanted to know the names of the women who had served me food and filled my gas tank. Pointing to myself and saying, “Sarah,” I then pointed to them. After five or more failed attempts, we all laughed at me pointing and not understanding. Fortunately, I knew how to say, “Thank you” in Vietnamese.

Empty tank out of mind, I hopped back on Scarlett, and swerved a bit after kick starting the engine. The women were laughing as I rolled out of sight.

On the Road to Sa Pa, Vietnam

2 thoughts on “Keep Calm and Carry On”